Posted on August 19, 2016 by christine mccartney

#1 Jurassic Park is for real. 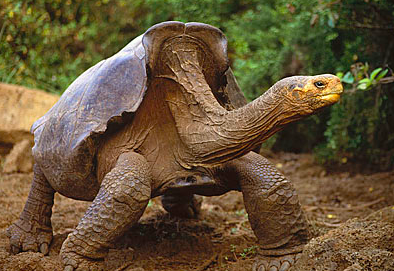 Scientists in Galapagos believe they can restore a species of tortoises that is extinct.  They will do so by copying DNA from Lonesome George, a Pinta Island tortoise who was the last of his kind.  He died in 2012 as the Charles Darwin Research Center was desperately attempting get him to mate.  Promisingly, scientists from the United States and Ecuador believe that a “copy” will have up to 95 percent matching DNA.

#2 Pirates loves tortoises as much as buried treasure.

One of the main reasons for the near extinction of Galapagos tortoises is the fact that they can live for almost a year without food and water.  This made them an easy food source for pirates, who would load their ships with the tortoises.  The doomed tortoises would just wander the decks of the ships, waiting to be eaten.  According to the internet, they taste sweet and tender.  Ugh.

#3 Even Darwin liked to eat the tortoises!

Charles Darwin and his crew took thirty tortoises to eat when traveling by boat to Polynesia.  Enough said. 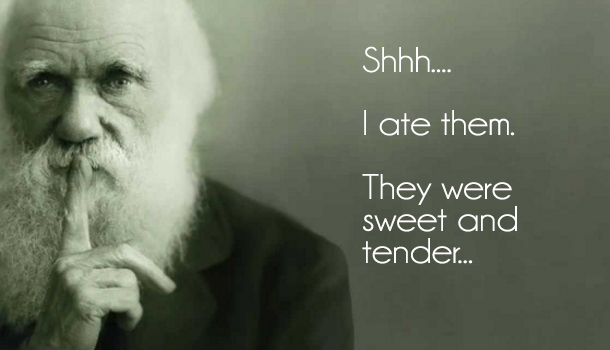 #4: Marine Iguanas can dive way deeper than you can. 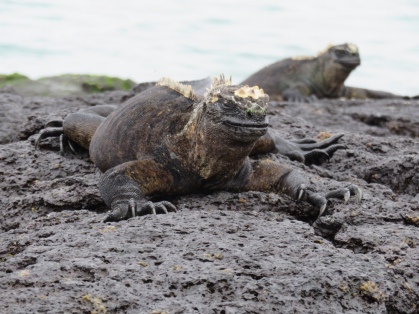 The male marine iguana can dive thirty feet under water without any help from the equipment you or I would need (unless you are a practiced diver).  Interestingly, they are also the only lizard that forages in the sea.  They are everywhere in Galapagos, but each island has a species with unique adaptations that have evolved over hundreds of years.  After they dive to feed on algae (yes, they are vegetarians too) they warm themselves on the dark lava rock, often piling on top of each other, until their body temperatures have risen.  Marine iguanas are threatened by non-native animals, such as rats and dogs, who feed on their eggs and their babies.

Galapagos penguins mate for life. They are the only penguins to breed north of the Equator in the wild.  There are fewer than two thousand of them left in the world.  Since they breed along the edges of the land, mainly in crevices of old lava flows and caves, sea level rise affects their chances of survival.

#6 The Hokey Pokey just got attractive.

Male Blue-footed Boobies stamp their feet to attract females.  Approximately one half of all Blue-Footed Booby mating happens on the Galapagos, and interestingly, the bluer a male’s feet are, the more attractive they are to the females.  This guy is a seven: 😉 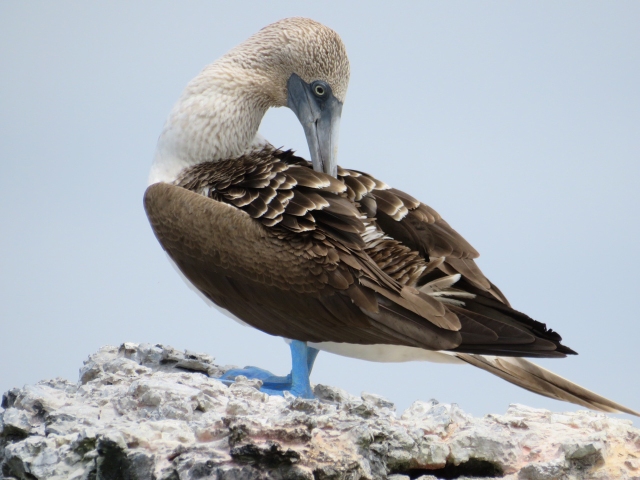 …and they are really hard to catch.  They are infamous for scuttling away into the lava crevices as photographers get close.  Although in youth, they are black to match the rocks and protect them, as they get older, they take on all shades of red, blue and yellow.  Called Sally Lightfoot crabs, they are not eaten by humans, but used as bait by fisherman. 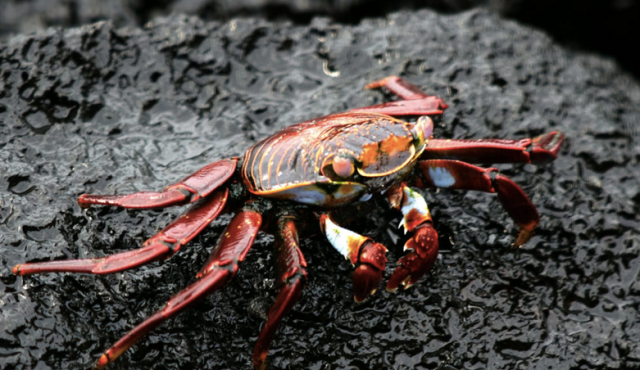 #8 Swimming with Sea Lions is AMAZING!

Does this really need an explanation?

With tens of thousands of teeth throughout their lives, it’s a good thing these sharks aren’t aggressive towards humans…especially since the snorkeling video above was taken in the same waters about ten minutes after this video:

#10 Our actions all over the world impact the Galapagos Islands.

Both global climate change and pressure from human activities impact the ecosystem function and the natural recuperation of living communities on the Galapagos Islands, on land and in the water.  Sea level rise, caused by global warming, will reduce the beach areas necessary for the nesting and breeding in many species.  Higher sea surface temperature, as well as ocean acidification threaten marine species; both of these occur as a result of too much carbon-dioxide in the atmosphere, which is created by the human use of fossil fuels.

Galapagos Islands’ ecosystems are also threatened by invasive species and tourism contributes directly to this.  More than one quarter of the insect species on the archipelago are invasive, arriving on boats.  We had to be conscious as we moved from island to island and our bags were sprayed with pesticide when we flew in.  In addition, we recognize that as travelers, we added to the human impact on the islands, even though we stayed at a eco-conscious resort.  The boats we traveled in, the waste we created, the energy we used for hot water and the food we ate all impacted the islands we visited.  We hope that we can offset this negative impact with our renewed commitment to environmental activism that we will share with our students.

We are inspired by a local non-government organization on Santa Cruz island called Lonesome George and Company.  They partner with organizations that educate young people on Galapagos, helping them to see that their choices do have an impact on the world.  This is a message for all of us. 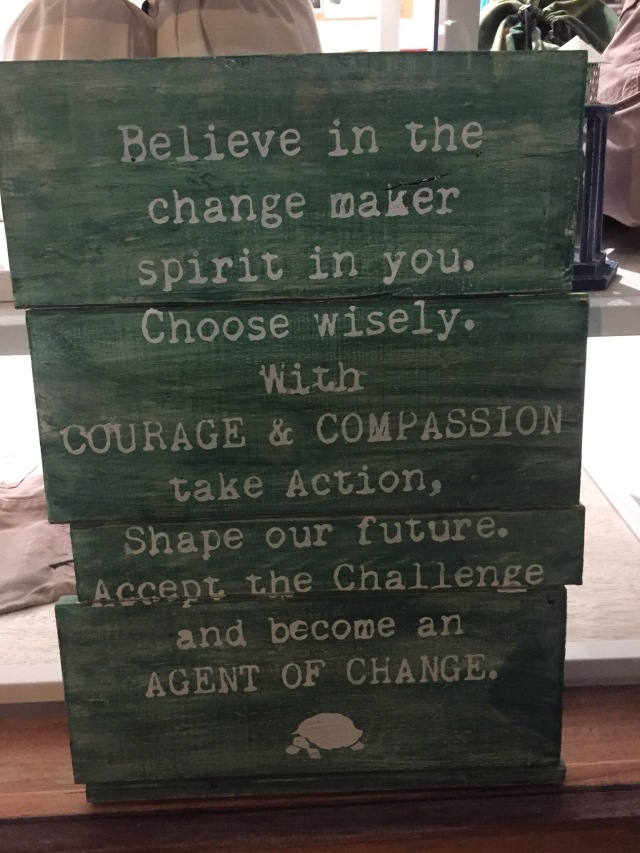 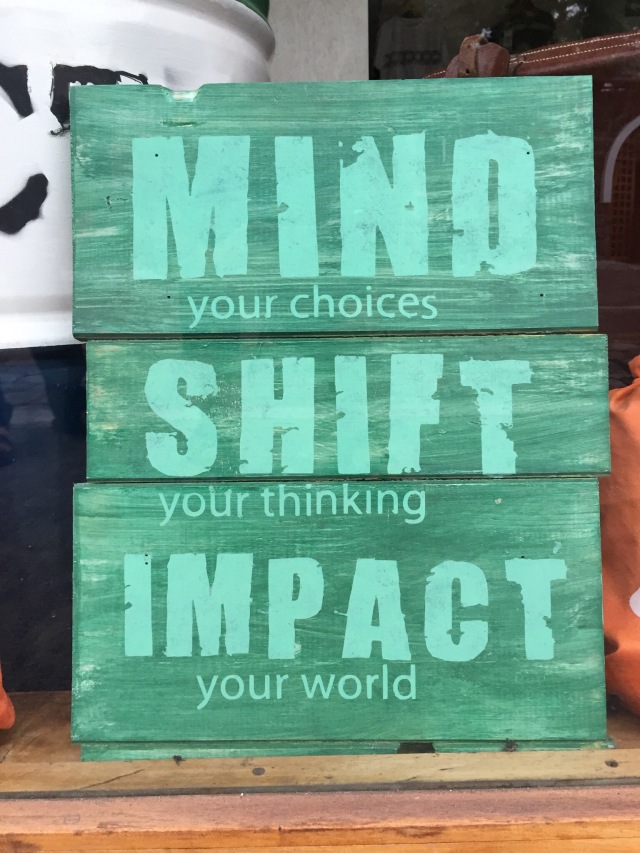 I am a teacher, a wife, a proud aunt, a dog rescuer, a person who has been rescued by my rescued dogs, a hiker, a four time (phew!) cancer survivor, a runner, a tattoo addict, a vegetarian, an advocate, a friend and a happy traveller. Enjoy!
View all posts by christine mccartney →
This entry was posted in Uncategorized. Bookmark the permalink.