Posted on August 18, 2016 by christine mccartney

When we got to the top of Sierra Negra, the first comment out of Ms. Mac’s mouth was, “I’ve seen what Mars is like…and I don’t love it…” 🙂  It wasn’t so much the amazing and unique scenery at the hottest portion of our hike up Sierra Negra, but more the deliriously blazing sun that attacked from all directions, beaming overhead and reflecting off of the sparkling black magma rocks at the top.  Although the volcano hasn’t actually erupted in 11 years, this picture from the tour guide shop pretty much sums up how it felt at the top:

The beginning of the hike was fantastic.  During the one (of two!) seasons in Galapagos, the cold South Equatorial ocean current flows around the whole archipelago and causes the air temperature to drop, marking the arrival of garua season, during which clouds and wet air envelope the highlands.  It is not rain, but rather a super-fine mist that you can actually see blowing in the winds, as if you are in a thin cloud.  As we set out on our hike, we were surrounded by this and enjoying the cool, almost tactile feeling it provided.

When we reached the center of the volcano, we couldn’t believe how vast the caldera (center crater)  was -about 4 miles by 6 miles wide!  At 4,890 feet, it is the largest and most active volcano in Galapagos.  It is approximately 535,000 years old, which is relatively a baby in terms of land masses on the planet.  Prior to the 2005 eruption, the GPS monitoring on the volcano did not record any activity, meaning that it could erupt at any time, without warning! 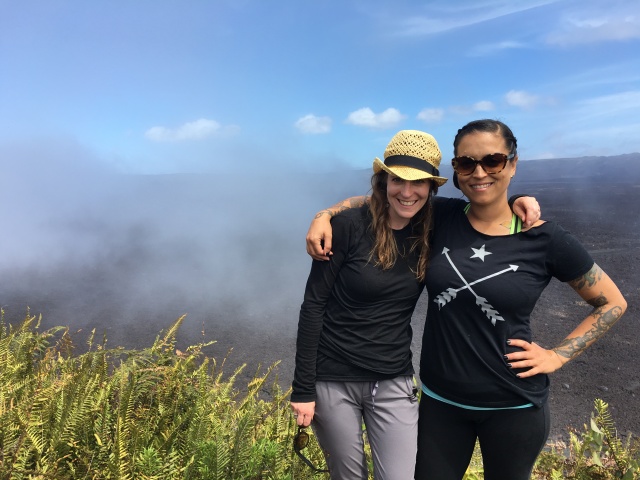 Here we are at the top of the caldera.  Notice that we are just emerging out of the gurua behind us.  Little did we know how much that mist was protecting us from the sun.

Here is a portion of the caldera…you can see how enormous the rounded edge is.  We did not walk around the entire thing, as the sun was entirely too hot and the distance too long. Geologic time was evident; we could see different types of lava from various eruptions, some that had flowed smoothly over the ground, and some that were rocky and slid under our feet.  The only comparison we came up with was that it was like standing on the edge of the Grand Canyon, but the colors were like nothing we had ever seen. 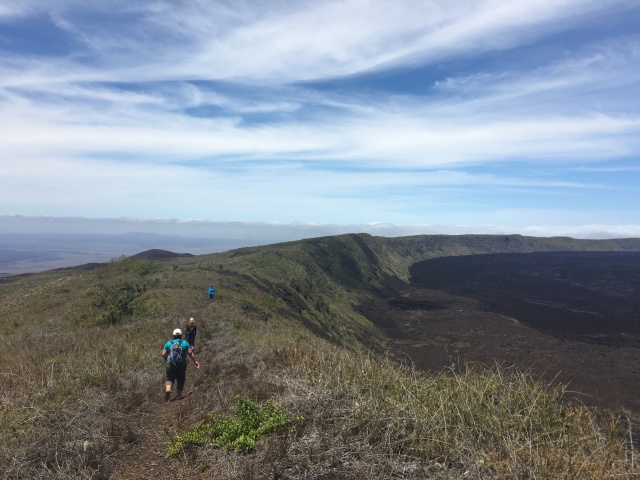 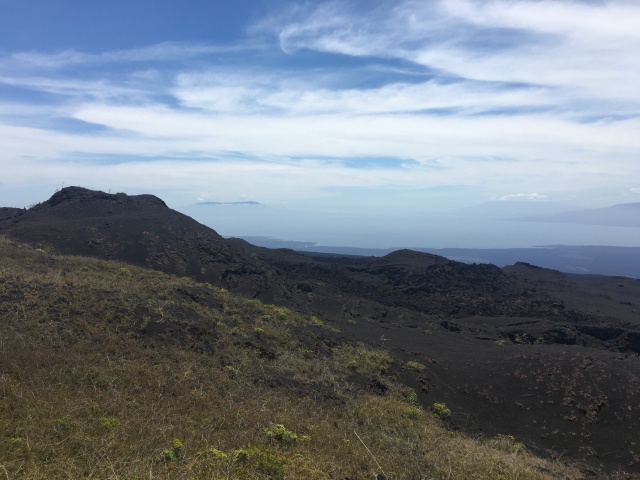 Here is a video of our guide discussing some common misperceptions about Sierra Negra and the surrounding area.

Although the view of the landscape was beautiful, what was under our feet was even more astounding.  The black lava shined like diamonds.  It was incredibly tempting to pocket a piece, but we restrained ourselves partially because it is illegal to take anything from a protected area.  Officials actually search your bag when you arrive at or leave one of the islands.  But more so because we also recognize that it is unethical -imagine every person who walked up here stuck some in his/her pocket.

The descent was also steaming hot, but we found one tree for a brief respite. 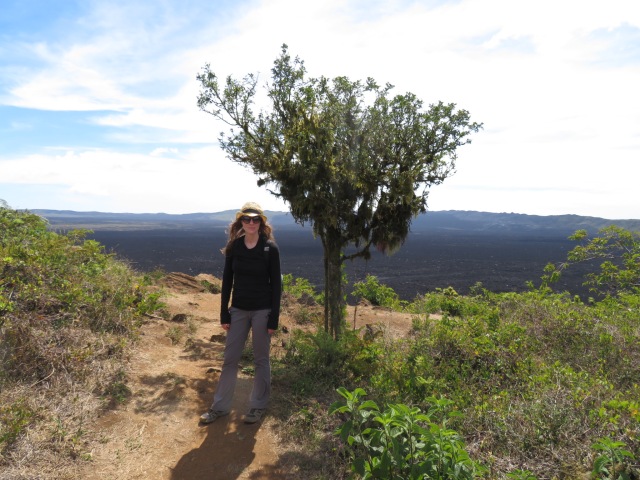 You will notice that Mrs. Hesse has sooo much clothes on for how hot we described it to be…that was because you had to be fully covered from the sun to avoid getting a bad sunburn and dehydration.  Luckily, there was a ton of guava growing all over the side of the paths to help quench our thirst:

The finches from the island also love this treat. 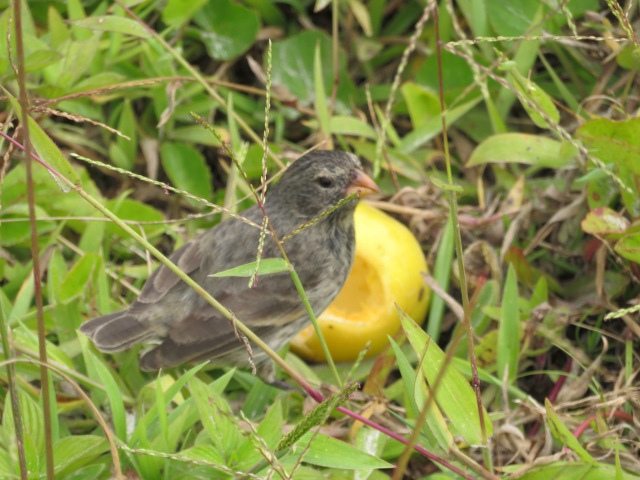 By the end of the hike, we were exhausted.

…but still had some snorkeling left in our day.  More to come!

I am a teacher, a wife, a proud aunt, a dog rescuer, a person who has been rescued by my rescued dogs, a hiker, a four time (phew!) cancer survivor, a runner, a tattoo addict, a vegetarian, an advocate, a friend and a happy traveller. Enjoy!
View all posts by christine mccartney →
This entry was posted in Uncategorized. Bookmark the permalink.